Perspective on the Second Quarter 2020

Perspective on the Second Quarter

Throughout the second quarter of 2020, we have begun to see the expected impact of the coronavirus on U.S. and world economies. Some areas are reopening, while others remain hot spots with record daily cases of the virus being reported. On June 8, the National Bureau of Economic Research announced that a recession began in February, ending the longest run of U.S. economic expansion (128 months that began in June 2009).1

In the context of this news, many people might expect the stock market to be on the ropes, but investors have once again been reminded that the stock market’s value is driven less by current economic indicators and more by expectations about the future. In fact, the Dow Jones Industrial Average and S&P 500 Index saw their best month in April in more than three decades. These gains reversed much of the decline that occurred in the previous two months. What is the disconnect between the performance of the U.S. stock market and the macroeconomic indicators or reports coming in?

The Stock Market Is Not the Economy

A quick Google search for the phrase “the stock market is not the economy” comes up with more than 25 unique articles written in recent weeks with this exact title or a very similar headline. For the second quarter of 2020, the Dow and the S&P 500 were up 17.8% and 20.5% respectively while the same indices are down –9.6% and –3.1% respectively for the year-to-date period. Both are either just shy of or above where they were one year ago when the unemployment rate was near record lows.

The recovery of the market from the March lows has primarily been led by U.S. large cap and growth stocks while international stocks, real estate and small cap and value stocks have bounced some but not nearly as much. The academic evidence indicates that small cap and value stocks have recovered and performed well over the long term and especially during recoveries; it just may take some time. In an article by Research Affiliates that studied six prior recoveries, “value outperformed the market in five, each time by double digits.”2 As noted in an article titled “A Premium Predicament,” for long-term investors, there has rarely been a more attractive time to invest in value stocks, and therefore in a diversified approach.

The Economy Is Not the Stock Market

Although stock market performance in the second quarter can be generally seen as positive news, we are fully aware there are situations and difficulties happening around the world that are not reflected in stock prices. We continue to have difficult conversations with clients who have seen a pay cut, been furloughed, or who have lost a family member or friend in the pandemic. We are under no illusion that in the next few months we are likely to see more of the same kinds of events affecting clients and their families.

Although past performance is no guarantee of the future, we can look to historical data as a guide for how we should behave when current macroeconomic indicators point to a recessionary economic environment. Dimensional Fund Advisors examined 90 years of U.S. equity premiums (a stock’s return in excess of a riskless asset) and the respective U.S. GDP growth for that year to understand if a correlation exists (shown in Panel A).3 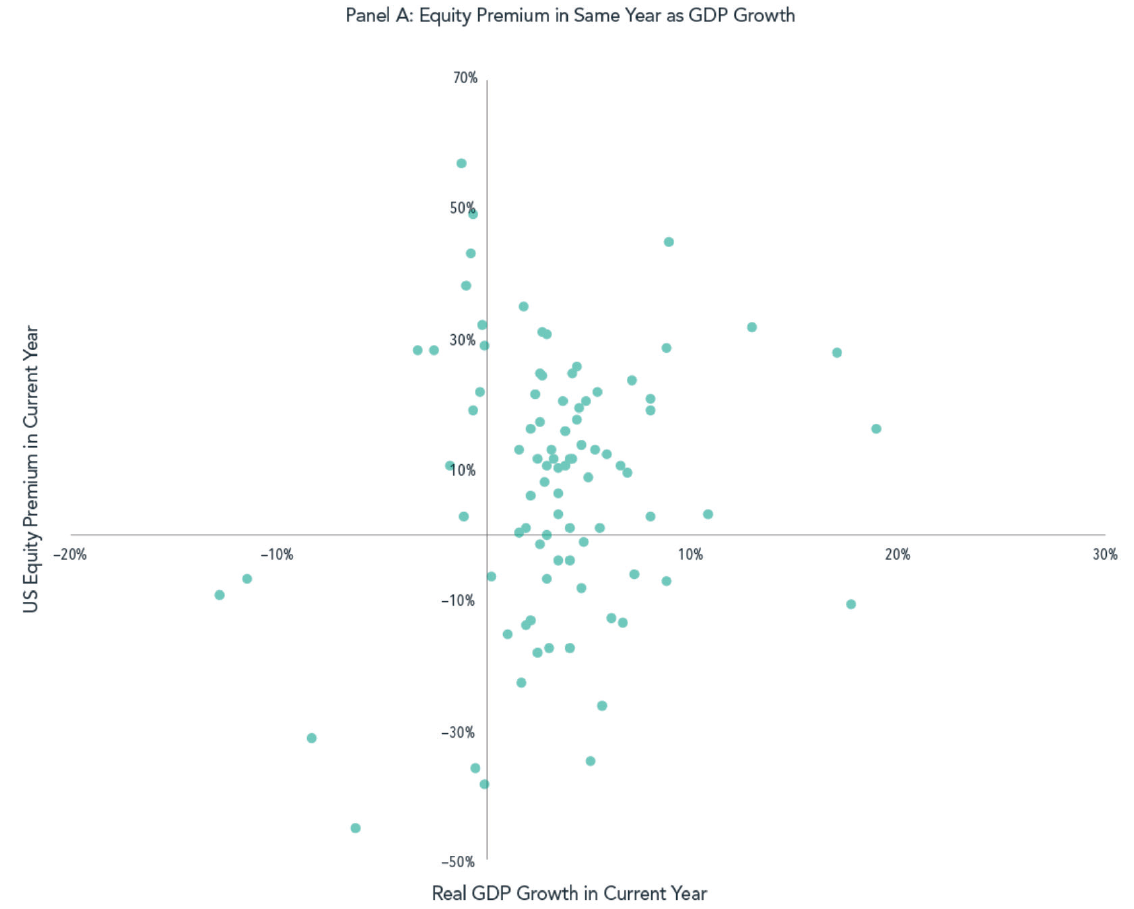 According to that data, there is not a strong relationship between current changes in GDP and future stock prices. This means that current economic data does not tell us much, if anything, about what the stock market will do in the future. This makes sense. The current economic data is known and incorporated into everyone’s expectations about how companies will do.

It begs the question as to whether the reverse is true. The answer is yes. In other words, the stock market historically has predicted the future path of economic growth. The following exhibit shows that current stock prices have correlated with future changes in GDP (shown in Panel B).4 Regarding this data, Dimensional concluded: “The positive trend in the data suggests market prices have in fact reacted to changes in GDP but have done so in advance of these economic developments coming to fruition.”5

In conclusion, these two charts reinforce the idea that stock prices are hard to predict because they are a leading indicator. Our knowledge of what is going on right now in the economy is taken into account by what already happened in the stock market and does not indicate much of anything about what the stock market will do in the future.

We do know generally all parts of the world will continue to grapple with the coronavirus in the coming months, and there will be economic fallout for communities, businesses and economies around the globe. Although we do not know what the stock market will do in the short term, we expect stocks to have positive returns in the long term.

The only course of action is to remain focused on your own long-term plan. If that involves stock market exposure, then you should stay invested because you never know when stocks are going to have their best month in three decades. Often, these tremendous months can occur when the economy appears to be at its worst.

We are here to support you and your goals, whether personal or financial or both. Please contact your advisor if you have any questions about the market or your portfolio.

1 “Determination of the February 2020 Peak in US Economic Activity.” The National Bureau of Economic Research, June 8, 2020.

3 “Under the Macroscope: When Stocks and the Economy Diverge.” Dimensional Fund Advisors, May 22, 2020.