Conversations with clients about investment performance this year have focused on bonds. Why did our bonds lose value? What are interest rates going to do? What about inflation?

We will try to address some of these concerns head-on in this article. While unsettling, we do not think these bond returns are something to fear, and we want to share our best answer to the question of “Will bonds stay down?” and “How will it affect my retirement?”

These Truly Are Very Unusual Returns for Bonds

We put together these two charts to show just how unusual the start of this year has been in historical terms. 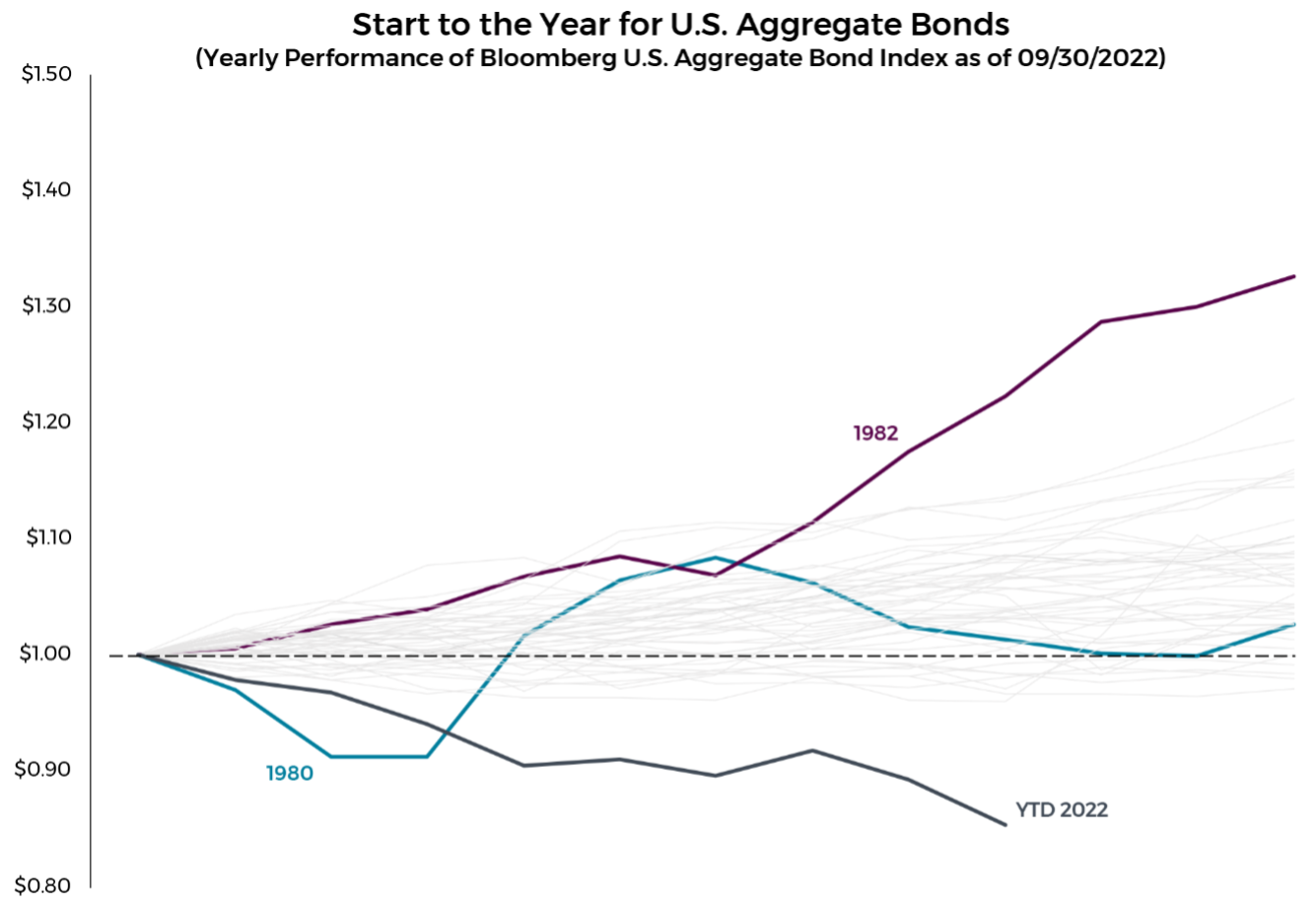 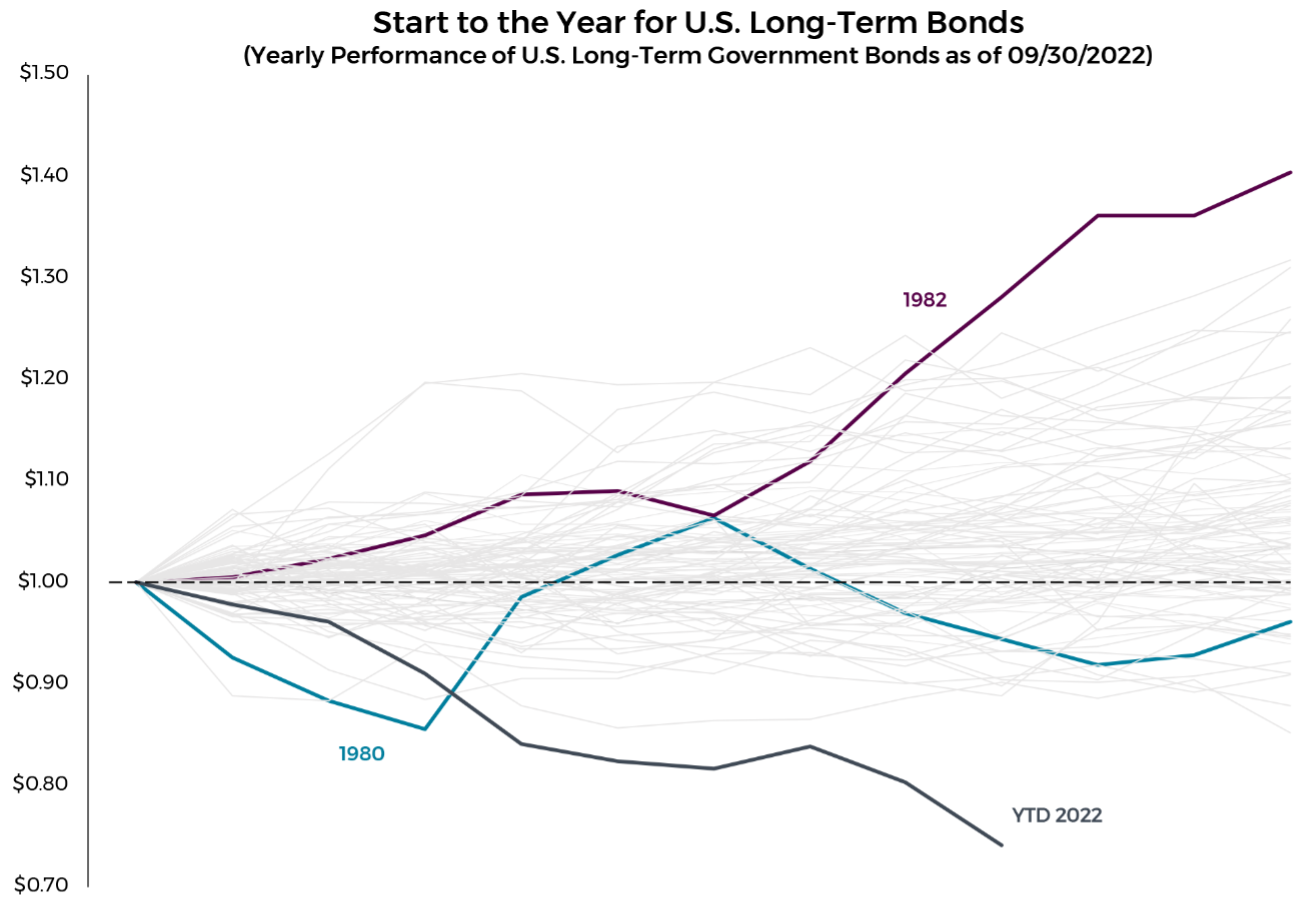 Year to date, this has been the worst return for intermediate and long-term bonds in history. This also suggests that looking forward to next year, it would be extraordinarily unlikely to repeat such an event. These losses are not driven by default or other such realized losses in value. These price losses are driven almost entirely because interest rates have gone up very rapidly.

Meanwhile, stocks and bonds are down at the same time. Since the start of the S&P 500 Index, there have been 25 calendar years in which the S&P 500 Index had negative returns. In all of those years, an investor would have been better off in a 60/40 portfolio (holding 60% stocks and 40% bonds), whether that portfolio was constructed of long-term diversified bonds or short-term, high-quality bonds. This year is the first year, if it remains the same, that a 60/40 portfolio may do worse in a year when stocks had negative returns. We do not think that the 60/40 portfolio is dead. Holding bonds will continue to be important for dampening risk in the future. Looking forward, we expect a 60/40 portfolio to reduce stock market losses by an average of 50% in those loss years, just like it has in the past.

There are two reasons we hold bonds. The first is to diversify stocks. The second is to earn the interest payments from those bonds.

The good news around these bond losses is that the higher interest payments are a very good thing for investors, especially retirees. While diversification has not worked as it has in the past, the loss in value is largely offset by the fact that we expect to earn higher interest in the future. Either bonds will pay out more interest in the future, or bond rates will fall back down and we should make back most of the principal lost as bond prices rise. Either way, long-term investors should be better off because real interest rates have gone up.

That sounds too good to be true, so let’s put that in numbers. The Bloomberg U.S. Aggregate Bond Index, for example, is down 14.61% year to date, but investors expect to earn dividends that will add about 29% more value cumulatively over the next decade. The compound effect on your long-term wealth is positive. Beyond 10 years, individuals are projected to be substantially wealthier than they would have been had interest rates stayed low.

Furthermore, when bonds have had negative returns in the past, the time to recovery of those losses has historically been very short. 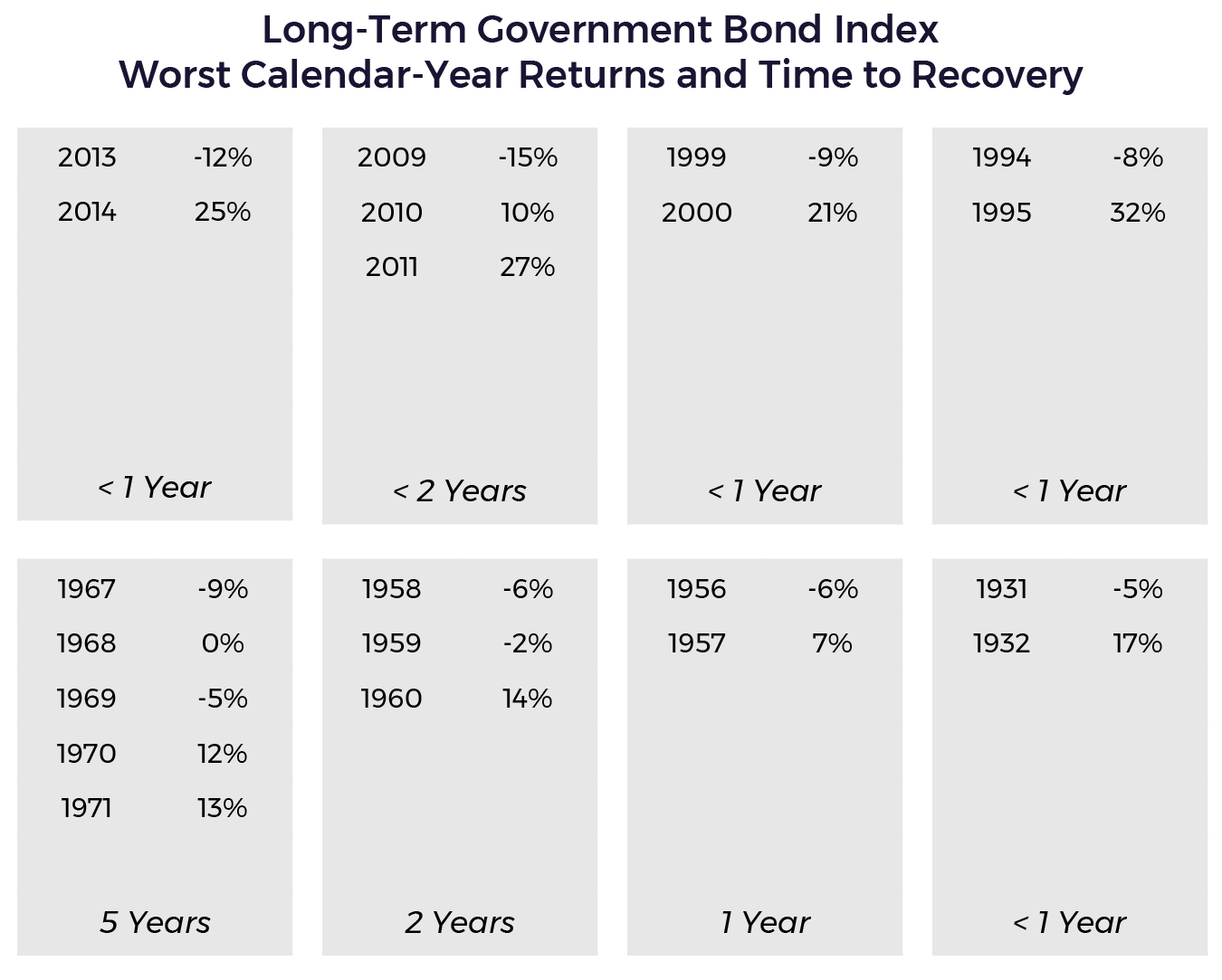 The table above does not imply that interest rates will necessarily drop back down next year, but we also do not think the common statement that “bond rates are going to remain high as long as inflation is high” is true either.

Is This Driven by Inflation?

The common story is that this year’s higher yields are driven by inflation, but looking at the data, this does not seem to tell the story of the bond market. Yields in the bond market are made up of two elements:

This means the entire increase in interest rates can be attributed to an increase in real yields. The expected returns for bond investors (net of inflation) are significantly higher now than they were at the beginning of the year.

Should We Take Less Risk with Bonds?

One question some clients have asked is whether we would have been better off invested in short-term bonds or even cash this year, since they have lost less. While true this year, the vast majority of years would have been worse off for holding those short-term bonds, especially after inflation. Over a lifetime of investing, short-term, high-quality bonds do not increase wealth net of inflation, as they tend to yield interest approximately equal to inflation. A diversified bond approach invested in bonds with exposure to term risk and credit risk tends to provide 1–2% per year greater return on average. For clients with sizable bond exposures, this means a lot greater wealth and ability to spend long term.

Some of the worst losses have been in long-term government bonds this year, even though such bonds have historically provided the greatest diversification to stocks. In the 10 worst stock market downturns since 1926, long-term bonds cushioned the blow with positive returns in 8 out of the 10 years. This means a portfolio holding these bonds reduced the downside better than shorter-term bonds or cash the vast majority of time, but not every time.

In the past 22 years, such a diversified bond approach, as compared to a short-term, high-quality approach, has added material wealth over time. A diversified bond approach was at least 1% better in 14 years, while the short-term, high-quality approach was at least 1% better in only 2 years (2013 and this year)! The outcomes were similar in the remaining 6 years.

If an individual started out with a 60% stock/40% bond portfolio worth $1 million in 2000, they would currently have about $3.34 million with short-term, high-quality bonds, and $4.3 million with diversified bonds, $1 million more.

It does not work every time, but the preponderance of the evidence suggests investing in a diversified bond approach is the most prudent course of action over the long term.

What About Today? Is There Anything We Should Change?

The result will be that we want to continue following the same approach of owning diversified bonds as we have in the past, but we want to shorten the maturity slightly. This makes sense, given that short-term bonds currently pay more interest than long-term bonds. We still want to maintain a holding of long-term bonds, but shift our allocation slightly from 30-year bonds into 20-year bonds (the inversion on the right side of the chart).

Similarly, we plan to shift about half our allocation of core bonds from a market-like 7-year duration into bonds with closer to a 3-year duration (the inversion on the left side of the chart). These changes are consistent with our disciplined approach and have everything to do with where today’s interest rates best compensate investors for taking risk looking forward. It should increase expected returns slightly while also dampening the ups and downs of our bonds in this unusually volatile bond market.

When we look at our portfolios, we see significant drops in value in the bond positions because of one of the largest moves in interest rates in history. This can be unsettling for investors unless we take a step back and understand the long-term implications.

Long-term investors are now earning much more on their bond portfolio. Coming into the year, bond investors expected to earn 2% or less in perpetuity. Now long-term expectations are closer to 4%. That difference in income makes investors more secure in their retirement spending and wealthier long term. Higher interest rates (especially without higher inflation expectations) are a valuable outcome for the well-being of long-term investors, and we are focused on being properly positioned through a disciplined approach to take advantage of the situation to provide a more secure long-term future for our clients.

Forum Financial Management, LP is registered as an investment advisor with the SEC and only transacts business in states where it is properly registered, or is excluded or exempted from registration requirements. SEC registration does not constitute an endorsement of the firm by the Commission nor does it indicate that the advisor has attained a particular level of skill or ability. The home office is located at 1900 S. Highland Ave., Suite 100, Lombard, IL 60148. Before making an investment decision, please contact our office at 630.873.8520 to receive a copy of Forum’s Advisory Agreement and Form ADV Part 2A, which includes Forum’s fee schedule. This information is intended to serve as a basis for further discussion with your professional advisors. Although great effort has been taken to provide accurate numbers and explanations, this information should not be relied upon for making investment decisions. web: www.forumfin.com